Latest topics
» Coming back to the pitt soon.

» Woodpecker in my neighborhood

Can I arm someone with hammer/hammer/javelin, then use a min 1 trigger of OP throw to get them to throw the javelin then switch to Trigger 6 with bash or something?

Or should I do javelin/hammer/hammer and they will switch to a hammer in each hand once they throw the javelin???

All three are trowable weapons.

Ok. So if I do jav/hammer/hammer, will she switch to a hammer in each hand on a 'only two throwable weapons' trigger? Or will she fight hammer/open hand on that trigger, saving the second hammer for if she gets disarmed?

There's an easy way to find out. Or just don't mess with throw with new gladiators. (pro tip)

You could throw all 3 then switch to MA! You might want to get a few trains first though!

lol Sure. Easy way to find out

Not running her with MA

But I guess we'll find out on her first fight.

Maybe it's how good my Boar Spear Dwarf Ug did on my last account with his 'throw two of them, then lunge with the third', but I like the idea of opening with thrown weapons. If I get the intiative drop I should get an attack in that pushes them back or hits them allowing me a second chance at initiative drop on them as I go hand-to-hand.

Just in case anyone is wondering:

I experimented with a warrior who would only throw weapons.  I decided I would have him throw all his weapons and then set a trigger to have him switch to martial combat if he picked up a non-throwing weapon, hoping this would cause him to drop that weapon and then I would switch back to op throw and pick up another (hopefully throwable) weapon.

Well, this doesn't work.  If you switch to martial combat with a incompatible weapon, your gladiator will just put it in reserve.  Once a pure op throw picks up a non-throwable weapon I think he is screwed unless disarmed or such. 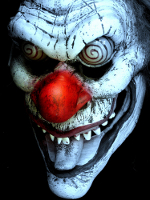 Also, it is my strong opinion that running op throw doesn't make you any more likely to pick up a throwing weapon than any other strategy.  This seems strange.

In addition, I trained most throwing weapons to a 1 or 2 and it had little noticeable effect on the rate of picking them up.  Perhaps I would have done better by focusing on training one weapon instead?

I think there is a thread on this Pitt where Dux discusses the idea of a perpetual thrower, and he encountered the same problem, with a gladiator shifting a weapon to backup rather than pitching it back on the sands.

I suppose you could run your guy throw 9 and just hope that if he picked up a battle axe, he would be so fast and clumsy that it would slip from his fingers. More than likely, he would die a painful, horrible, early death.

There was a warrior in this pitt that used javelins. He eventually beat a monster and became one as one point. I mentions this for he once successfully killed a warrior with his first throw. I remember reading this and sitting amazed. Throw can be powerful as long as you have a high skill in throw.

I don't even try to throw a weapon unless my guy is an expert in throw, minimum.